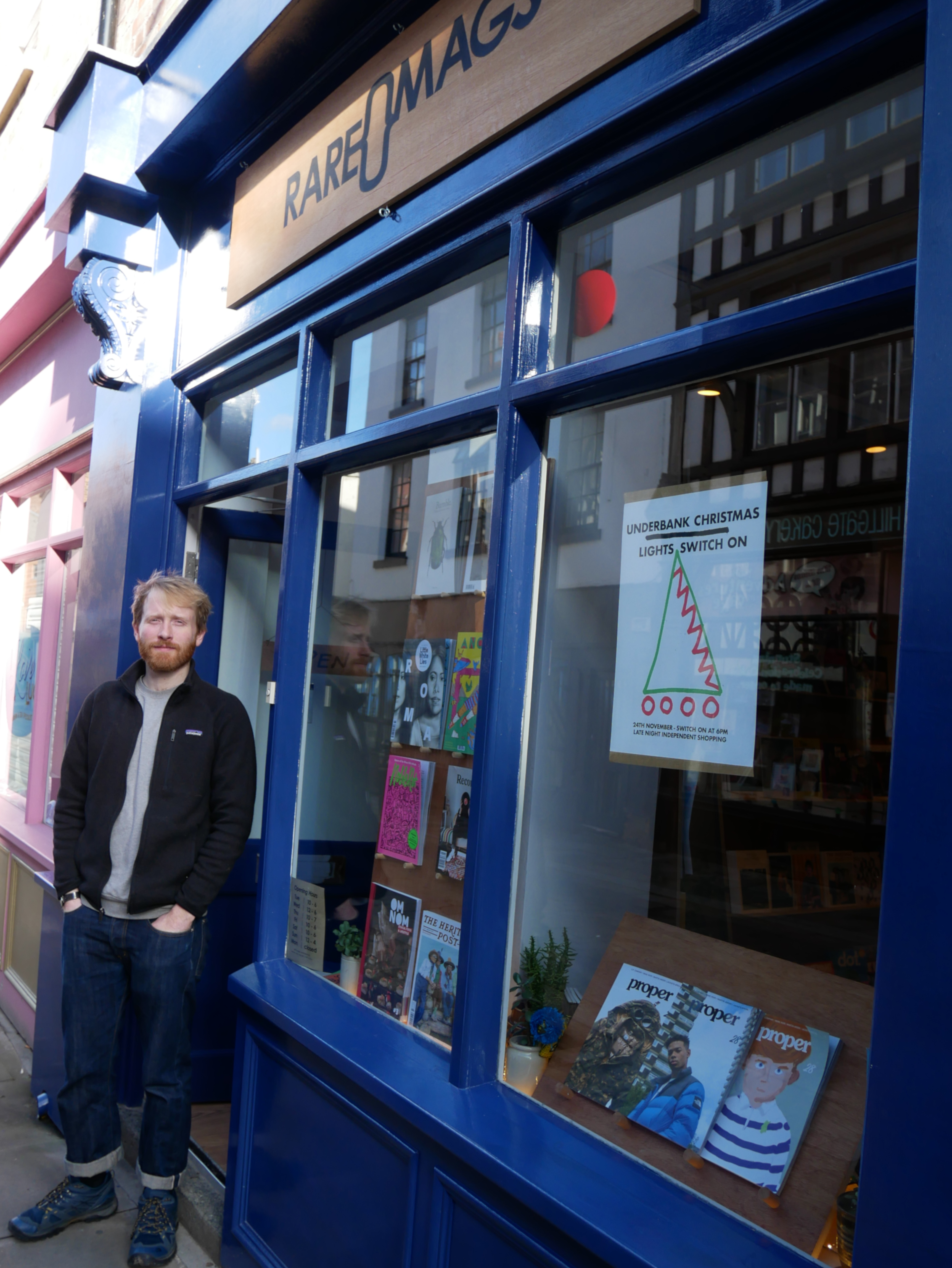 Rare Mags is different than your average newspaper kiosk. Walking into Martin Wilson's and Holly Carter's shop is like entering an art gallery: Ceiling -high shelves show colourful covers printed on weighty paper. Under their label Rare Mags the couple sells rare magazines from all over the globe in Stockport's Old Town. In this interview Martin talks about perks of living and working in Stockport, his and Holly's love for magazines and why print isn't dead after all.

Why is print not dead?

There’s a need for the tactile. We’ve seen the growth and strength in print for more than 10 years. It’s very similar to film photography or analogue music formats, the ubiquity of the past has been replaced with a smaller but more fanatical following, both producers and consumers.

What did you do before you had Rare Mags?

I’ve been in the bookselling game for the last decade with a quick stint as a chef, and Holly has been a product design teacher and designer.

Why did you choose Stockport as a place to start your business?

I was brought up here, and we moved back here before opening the shop. It’s a really big town with lots of different areas and characters. There’s a lot of good, but also a lot of space to make a mark and try things creatively instead of being in a constant battle to keep up with the bills. That’s not to say it’s easy, but we can afford to try things out and not immediately go bust! (Hopefully).

Such a tough one, historically we’ve both been fairly set on Apartamento. More recently titles that we’ve really been getting in to are Too Much from Japan and MacGuffin from The Netherlands.

What’s the rarest magazine you sell and why is it so seldom?

Very few of the magazines we stock are more frequent than four times a year now, which speaks of a difference in content, it’s less news based and more a slow media realisation of subject. In terms of rarity, we’re always on the look out for seminal, defunct titles which were maybe a little ahead of their time, or hard to find international titles, so things like Inventory from Canada and Popeye or Clutch from Japan.

How many mags do you have at home and how do you store them?

We’ve lost count. They’re generally neatly on shelves, but we also end up with a lot of sorting piles, and magazines are always rotating between home and the shop.

What’s the perfect setting for reading a magazine?

That’s the beauty of a magazine, or most printed media, portability, and other than darkness, you’re pretty much able to read in any situation.

Where do you source the magazines from? How do you keep up to date?

It’s a constant search for new stuff, we look online a lot, which seems like an odd thing to do, but that’s why print and web stuff can be such a good pairing, they feed off each other. We’re also always really interested to speak to the makers of magazines directly, so we field a lot of enquiries in person or by post and email about new projects.

Do you sell any local magazines?

Yes, we love the amount of local stuff that’s around, a few titles – Proper, The Modernist, Bumble, Nrth Lass, Actual Size. And a lot of local independent artists are producing great stuff too which we try to give as much room to as possible.

In which area in Manchester do you live and what do you like the most about it?

What’s your favourite pub in Manchester and what would you order there?

Stockport itself has a very strong pub game, The Magnet, Bakers Vaults, The Queens Head, all excellent for their ales. Bakers Vaults has a good kitchen too. In the city we’ve got soft spots for Sandbar (beer, pizza, whiskey), Common (hot Vimto), Marble (beer and cheese!)

A Day Well Spent in Ancoats