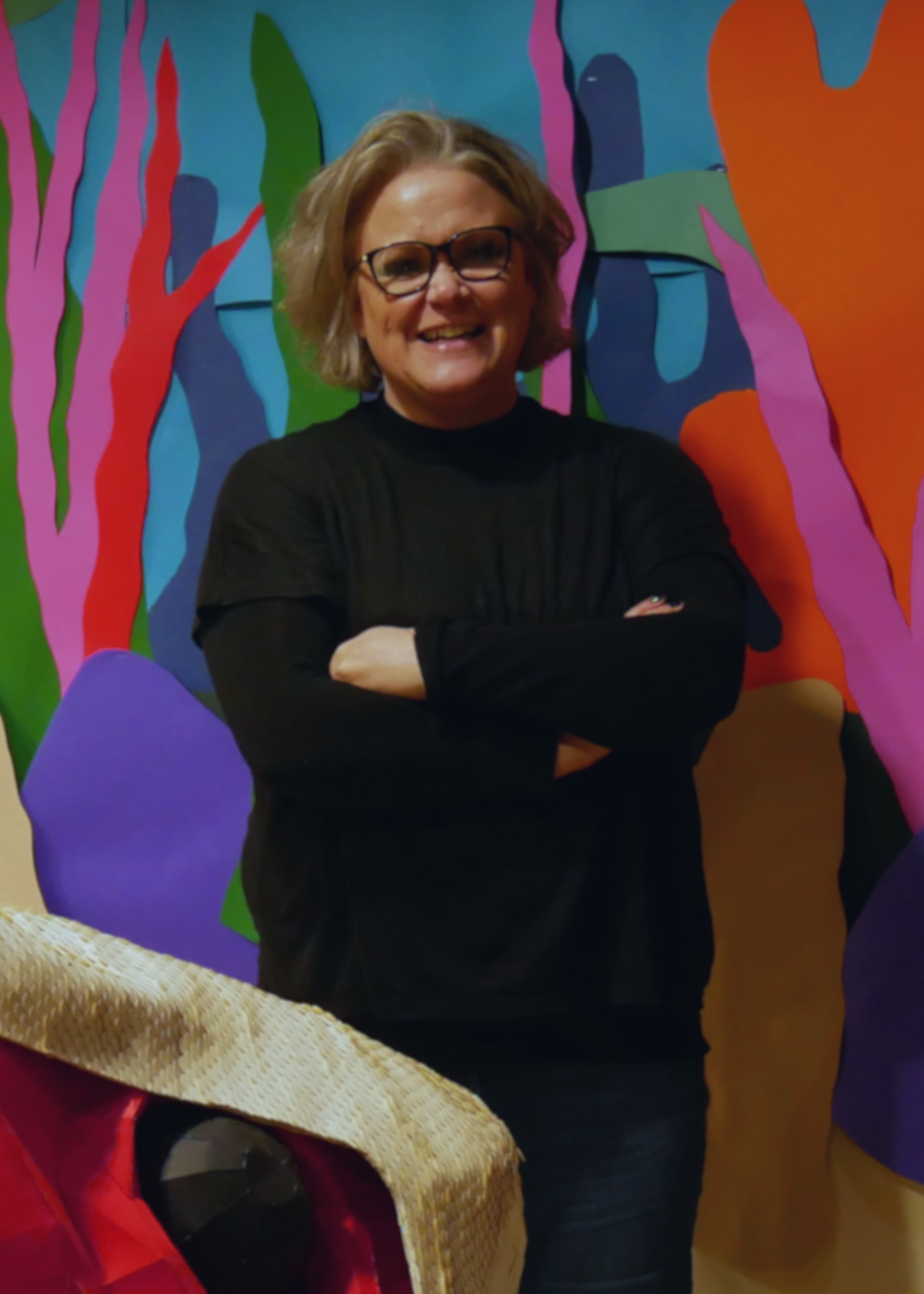 Bye-bye grey shutters, hello pink elephants and colour blocking! Nonprofit initiative Open Spaces is turning empty shop fronts in Stockport into pieces of art and thereby the old town into an open-air gallery. However, the volonteers aim for higher goals than simply displaying art. By attracting passers-by and creatives from Manchester they want to revive the whole area around Lower Hillgate. 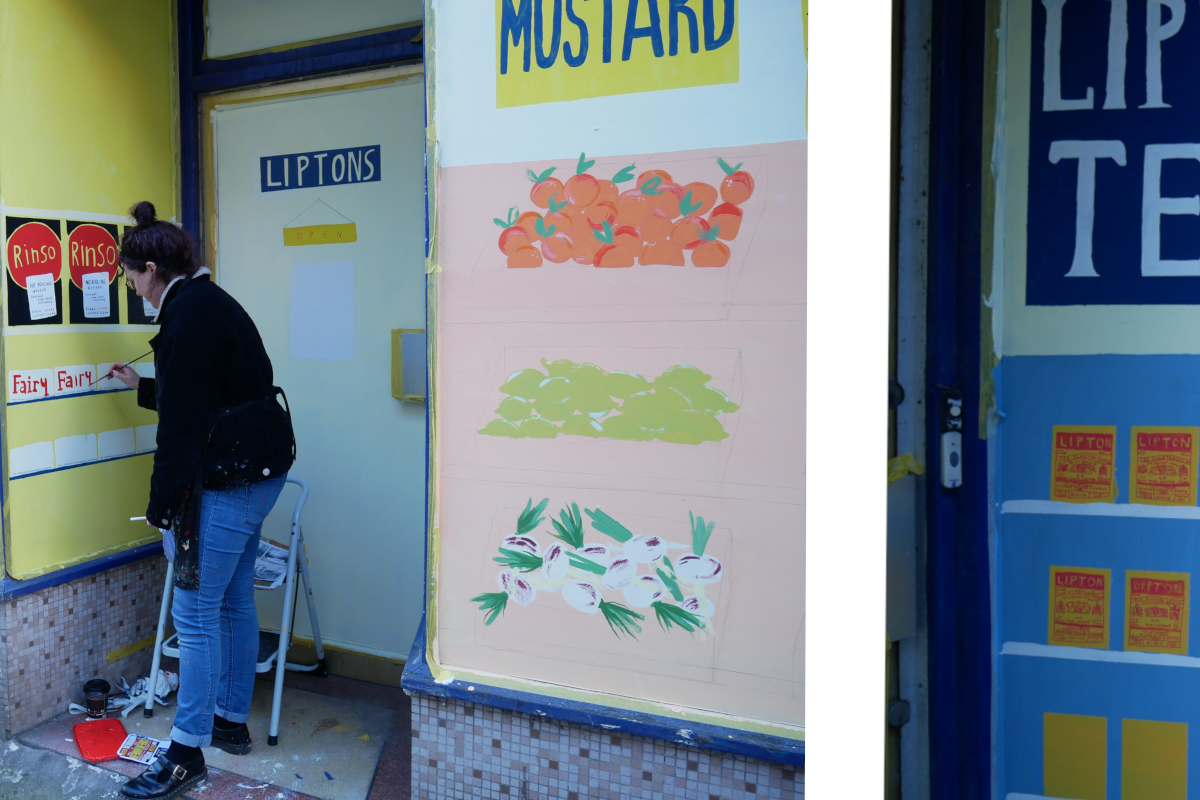 A young woman with dark, curly hair and a blotted apron dips a tiny paintbrush in a dollop of red colour and draws a neat ‚O‘ on a yellow background. Her name is Maisy, she is a 23-year-old illustrator and for her most recent artwork, she draws a dozen retro Lipton Tea packages on a rather unusual background: a window of an abandoned shop.

Although more and more independent businesses like the Plant Shop or Rare Mags are trading in Stockport’s old town empty displays, grey metal shutters, and barricaded shop fronts are predominating the pedestrian zone.

The nonprofit organisation Open Spaces, founded by two Stockport-born and bred friends Jane and Vicky, wants to put this situation to an end. Its mission is to hide the tristesse of empty displays with joyful pieces of art.

Jane – 44 years old, a grey bob, black nail polish – is sitting between brushes, paint containers and spray bottles in what you may call the headquarter of Open Spaces – a vacant building on Lower Hillgate that is going to be knocked down in a years time. „About six months ago my daughter and I came down to Stockport’s city centre looking for a guitar shop and the sight of all these empty shops was simply soul-destroying“, she recalls. „This area should be the hub of the city.“ For Jane, it was clear: There has to be a change. „In a small way like the transformation in the Northern Quarter“, she explains.

So she and her friend Vicky came up with the idea to organise a big pop-up event, where every empty shop is filled with an independent store for a weekend. This should give people an idea of how a vivid old town could look like. They approached the council with their plans but because some shops are owned by private landlords they couldn’t be implemented.

Instead of giving in the two women plotted an alternative project: decorating the council-owned premises to make Stockport look more attractive. Jane describes: „We re-do the shutters of any buildings that the council owns.“ At the moment there are eight projects in total, six of them are already done. 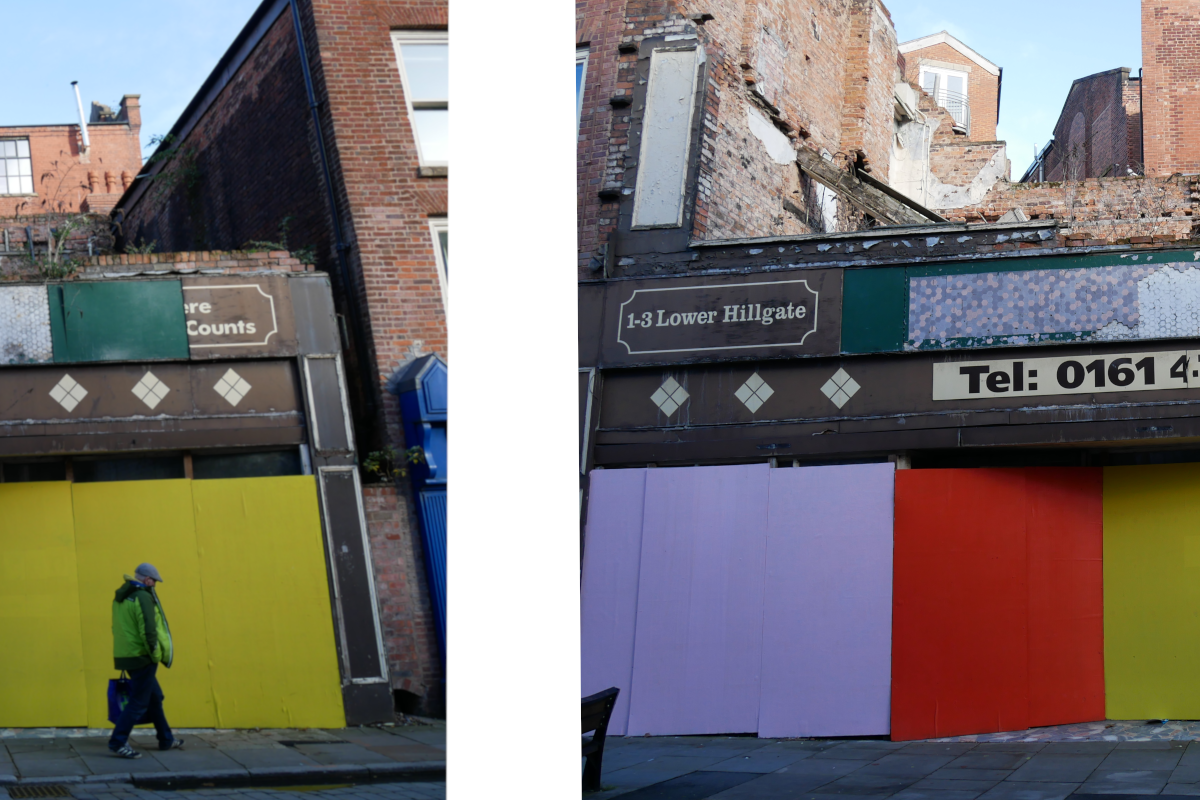 The overall theme for the artworks, which the council released as a kind of guideline, is „Remembrance“. Every shutter is decorated by a different artist or group of artists who interpreted the theme in an individual way using different techniques. Some paint, some spray, others draw. Maisy, for example, is taking spectators back to the beginning of the last century by illustrating the display of an old corner store that used to sell all sorts of groceries. To be as accurate as possible Maisy researched original images of the shop in the Stockport Archive. All in all, she estimates, the enormously detailed project will take more than two weeks to be finalized.

Important to know is that neither the artists nor Open Spaces are paid for their work. In fact, the opposite is the case: Jane and Vicky have already pumped about 1000 pounds in paint and brushes and give all the spare-time they can free after their full-time jobs to organise creatives and materials.

However, the council is supporting Open Spaces non-financially. The city lends two empty properties on Lower Hillgate to the initiative, where Vicky and Jane soon want to create a communal space for workshops and exhibitions as an interim use before those and two neighboring buildings get knocked down.

The commitment of the Jane and Vicky is equally remunerated by the reactions of passers-by. The public is giving great responses to the artwork. „99 per cent of the feedback is very positive“, states Jane. And it’s starting conversations. She says: „It is almost like a weird social experiment we never intended to do.“ People are stopping, talking, telling stories about Stockport.

Maybe this is the first sign of brighter times for Stockport’s old town. Jane at least believes in the potential of her hometown: „The ultimate goal is that there will be no more shutters. All you need is a vision to see the bigger picture.“